Work is progressing as planned on the construction of the Cabrits resort and spa. 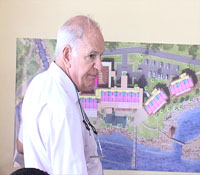 The multimillion dollar project is financed by the Kingdom of Morocco and is expected to be complete by October 2013.

“Once the project is completed next year October we would be in a position to receive guests immediately. We have a fully furnished facility and a conference centre which will seat about 200 people comfortably. This has been a major concern for Dominica which is why we took a deliberate decision in designing the hotel to include this conference centre. We’re also making allowances for duty-free shops because we have an operational cruise ship berth right now so we will also be catering for visitors from cruise ships. There will shops with local selling crafts and a spa open to the general public,” Hon. Skerrit said.

Forty-nine people from the north have been gainfully employed through the construction of the over thirty million dollar project. Additional steel benders are expected to join the work team to increase the pace of work.

The Prime Minister explained that more employment opportunities are expected when the hotel opens at the end of 2013.

“It is estimated that we would have to employ at least a hundred people full time based on the services that the hotel will be offering, namely the spa, the gym, security personnel, general staff, management staff totals to at least one hundred employees. These employees will receive salaries directly from the hotel but there are indirect jobs as well- fishermen who will be providing fish, farmers from Penville to Capuchin to Dublanc to Calibishie who will be providing agricultural produce and other goods to this facility.”

The construction of the seventy-five room hotel is the first phase of Government’s thrust to develop the Cabrits area.

Hon Skerrit stated, “We are in discussion with persons who are interested in constructing the marina. We believe that if we can construct the marina that would propel Portsmouth to a position where it could take advantage of the marine opportunities that are available.” We’re tying this in with the Cabrits Heritage and Ecology Centre. Dr Lennox Honychurch has been working on that for a few years now and he will agree that this is the first government that has used its own resources to restore this very important national treasure. In the past we’ve received money from the British and the Canadians but no Government has ever taken a deliberate policy decision to [improve on] this national park.”

The spillover benefits of the construction of the Cabrits Resort and Spa are endless and extend to parents of students attending the Ross University School of Medicine.

Prime Minister Skerrit said, “There are times when parents come to help their children get settled in at the start of school, they are forced to stay in the small apartments with the students. Ross keeps saying to us that we need to make room available in Portsmouth so that more persons can visit the country…instead of those parents going elsewhere for vacation, they can come here and be closer to their children and provide the support they require.”

Dominican engineer on the project, Burnett Biscombe described to the visiting dignitaries details of the facility’s design.

Meanwhile there have already been expressions of interest by local and foreign entities for the management of the hotel.

“We have groups from Dominica and two foreign groups who are willing to come to the island to look at the facilities [at the hotel]. They are ready to engage the Government in discussions concerning the management of the hotel because the Government will not be managing the hotel. Our interest is to bring jobs and economic activity into Dominica. It is therefore up to the private sector to manage the hotel under specific terms,” stated Hon Skerrit.

We have 173 guests and no members online