Hon Prime Minister and Minister for Finance, Dr Roosevelt Skerrit, has revealed that Government will proceed in constructing a small geothermal plant in Dominica.

Speaking at the debate on the Geothermal Resources Development Bill in Parliament on Monday, October 24th, the Hon Prime Minister stated that Government will take all risks associated with the construction of the facility following negotiations with various organizations.

“The Government will ‘go it alone’ with regards to the small plant. We have been negotiating with different groups of people. That did not come through and I think in retrospect because they had other considerations. They had other considerations like any partnership you were discussing. There were some issues among themselves and they figure it might be in their interest not to proceed with the project. 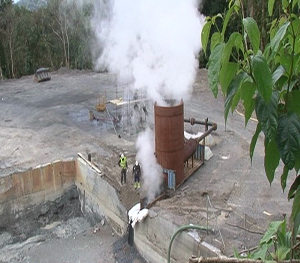 We will be in the business of generating and it is our intention to sell to DOMLEC and DOMLEC will pass it on to the consumers.”

He noted that this change will have a considerable impact on Dominica’s economy.

“This is in an effort to reduce on our import bill. To reduce on the trade deficit because importation of diesel and petroleum products is a significant contributor to the import bill. We would reduce on our foreign exchange leaving the currency union. We would bring back our jobs to Dominica. We would grow the economy,” Hon Skerrit stated.

The Dominica leader revealed that in addition to the international partners looking to come on board in the future, resources have been made available through the Citizenship by Investment Programme.

That official made a presentation to the cabinet. The Caribbean Development Bank has some sources of financing for renewable energy and for climate related projects. They have been literally begging us to accept a source of financing. The Dominican people through this cabinet has committed US $15m, funds from the Citizenship by Investment Programme to go towards the financing of the geothermal plant in Dominica.”

The Honorable Prime Minister noted that the project will significantly reduce the current cost of electricity benefiting the country on a whole.

He continued, “If we can reduce the cost of energy to the private sector we will create more jobs in our country.”