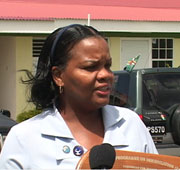 Dominica's Ministry of Health has captured the 2011 Surveillance Award from the Expanded Programme on Immunization (EPI) of the Caribbean Sub Region in Recognition of Excellent Report. The Award was presented to Dominica last month, at the 28th Caribbean EPI Mangers' Meeting in Barbados. Dominica's EPI Manager, Senior Community Health Nurse, Florestine Lewis accepted the award. The annual Caribbean Surveillance Award has been established to recognize countries that have performed outstandingly on the surveillance component of their program during the previous year.

In a recent interview, Nurse Florestine Lewis told reporters the Ministry of Health won the award because of its diligence in reporting cases of diseases from all sites (52 health centers)  on the island, and for reporting on time.

“Every week we are supposed to report to CAREC on time from all our sites, as to the communicable diseases that we have circulating in our country. So we look at diseases such as the flu for example, or other communicable diseases like acute diarrhea diseases or skin infections. Some of those diseases can be prevented by vaccinations, so we also look at vaccine preventable diseases. And every week whether we have cases or not, we are to report to CAREC on time, that we’ve had ‘x’ number of cases, or we have had no cases for the week.”

The Expanded Programme on Immunization (EPI) of the Caribbean Community has been one of the most successful programmes and is used as a benchmark by which other health programmes are measured.

In the past, Dominica has received second and third places and so Nurse Lewis said she is elated that Dominica has finally won first place. "I want the award to remain in Dominica. I am urging the health care providers to continue reporting and send in the samples in a timely manner". Awards for the second and third places went to Antigua/Barbuda and St. Maarten, respectively. The award is furnished by the Pan American Health Organization (PAHO), the World Health Organization (WHO) and the Caribbean Epidemiology Centre (CAREC).