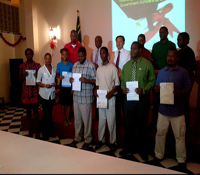 Ten Dominican students have been awarded scholarships to attend University in china this year.

The students received their admission notices from acting President of Dominica H.E. Dr. Edward I. Watty on Friday.

The students will join the ranks of the one hundred and seven other Dominicans who have studied in china since the establishment of relations between Dominica and The People’s Republic of China.

In his address to the students, Minister for Education and Human Resource Development, Hon. Petter Saint Jean admonished the recipients to use their education as a means of taking their country to the next level.

“Your role is to ensure that you work hard, remain focused and come back home to take Dominica and Dominicans to where we aspire to see our nation as what we define, ‘the next level’.

H.E. Wang Zonglai, Ambassador of The People’s Republic of China offered some sound advice to the students.

“Dear students, you may think four to five years in China is a long time, but in fact it can pass in a blink.  So please make good use of the time to learn new knowledge, gain experience, and make yourselves ready for the future.  Make it count and leave no regrets behind.  At the same time, difficulties and setbacks are inevitable on the way, including cultural shock, difficulties in studies and so on, however, as the saying goes, “no pain, no gain.”  Those growing pains are actually there to make you stronger.  So just believe in yourselves, keep working hard and never give up.  The belief and efforts will get you through all challenges you encounter in the future.”

The scholarship recipients leave for china in less than twenty days.

We have 669 guests and no members online