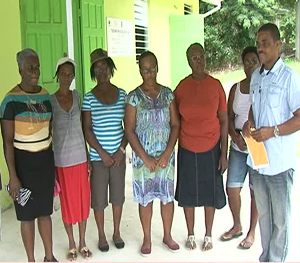 With the help of the Global Environment Fund Small Grants Programme and the Government of Dominica, the Delices Toloma Women In Action Group has erected their new home base according to industry standards.

As of Thursday, July 9th, 2015 they could cross off their list the task of sourcing funding for grinding equipment to process their raw material.

He said, “They are now at a stage where they want to do the furnishing as far as the equipment and basic facilities are concerned.  They made an appeal to me and I felt that given all of the effort that the ladies have put into this group that we needed to make some financial contribution to them and so with funding from Government’s Community-based Projects account, I am really happy to assist this group of industrious ladies by making a contribution of $20,000 to the group that will go to the procurement of the machinery that they need to finally see this factory operational.”

The 28 members of this group, since it was formed in 2007, have been working, both individually and as a group, towards this point.

President Albertha Sorhaindo assured, at the event which she described as a “happy moment” that the group had not lost hope.

She said to GIS News,”They are still passionate, although in the process some had lost hope but as you can see from today onwards things will gear up.

Lucille Lawrence is one of the members who sees toloma processing as more than a just common activity of 27 women and one man.

“After the decline of bananas,” she said, “the majority of people went into processing toloma and it has generated high income in our community both for the young, old and middle-aged.  You find people up their 70s still producing toloma.”

Lucille, the breadwinner of her family, has raised and educated up to university level, five of her six children from the toloma industry.

She says while the market is not as it could be, the $20,000 from the Constituency’s Parliamentary Representative has made her a bit more optimistic.

“Our product is now properly packaged and labelled.  We hope that with the help of Bureau of Standards we can meet the necessary requirements to export on a wider scale.  Right now we only produce locally and we have products on the shelves at all the supermarkets all over Dominica.  People travelling overseas always come and ask for because it is now better and easier to carry overseas [because of our new packaging].”