The rehabilitation of the Clifton village road which commenced in October 2014 is now complete.

In September of 2014, the nation’s Finance Minister and Prime Minister, Hon. Roosevelt Skerrit, contributed $150,000 towards the rehabilitation of the Clifton Road.

GIS News was on site last week with Hon. Member of Parliament for the area, Reginald Austrie who explained the nature of the project. 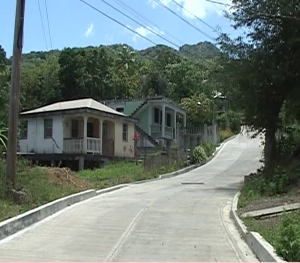 “From September we immediately began construction using local contractors. [Work included] drainage, widening and surfacing.  What was mainly for one-lane traffic was improved to two-lane traffic I most places with proper drainage on both sides where necessary. You can see for yourself the quality of work done and you can well imagine the aesthetic improvement.”

According to the MP, that road was about 40 years old.

The road was officially completed in February 2015 pending a few minor finishing touches.

Hon. Austrie indicated that some improvements were done around the Clifton Primary School yard including some fencing.

The Hon. Parliamentary Representative says there are plans to intervene in other areas of the community.

“I’m hoping that before the end of this financial year we can begin rehabilitation of one of the roads inside the village of Savanne Paille. The project has been approved; we’re just awaiting funding.”

He added that there is also work to be done in Cottage and Lagoon.

“It’s a [large] constituency but we need to touch everybody’s lives.”

Hon. Austrie who is also Minister for Housing says Government’s interest does not rest on infrastructure but on the development of its people.

He went on to list initiatives of Government which have touched his constituents young and old and in every sector.

He says projects like these simply speak to the Prime Minister’s unshakable determination and aggressive foreign policy.

“The world is facing a challenge but the Prime Minister has been able to go out there and raise the necessary resources to make these things happen. All this work you see around his country is not from taxpayers’ money per se; that is money negotiated by the Prime Minister whether through soft loans or grant funding from our friends.

“As long as the Dominica Labour Party continues to be the Government of this country, things will continue to happen for Dominica,” said Hon. Austrie.