The vision of having comfortable roads in the area is closer to becoming a reality for the commuters of Toucarie and Cottage.

In June of 2014, the nation’s Finance Minister, Hon. Roosevelt Skerrit gave a commitment of over $2.5m for the rehabilitation of roads in Cottage and Toucarie communities.

On Thursday April 23rd, GIS News took a tour of the ongoing road works in the constituency with Hon. Member of Parliament for the area, Reginald Austrie.

By the time our cameras got there, contractors were preparing the road with wire mesh to be filled with mixed concrete. 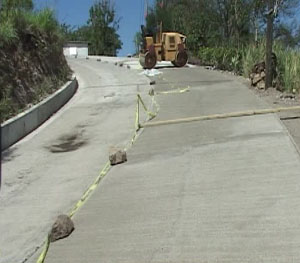 “The road was a bit rough…so we had to scarify and grade it out to get it to what we wanted. Right now we’re laying concrete [to] a five inch thick surface. We started on April 3rd and are hoping to be done in the next couple of weeks if all goes well,” explained project foreman, Keith Jacob. “Right now, what I left to be done is to connect the corners of the road.”

He said further that only after seven days will vehicles be allowed on that road and the corners will be connected. That will mark the end of the project.

Hon. Austrie gave GIS News further insight into the rehabilitation of the 400ft road. The project was conceptualized after the pipes were laid for the West Coast Water Supply Project.

“We began that work and did quite a bit in the Savanne Paille, Clifton and Capuchin areas but we had some challenges.”

Hon. Austrie explained that the contract was given to DipCon.

“We took a decision to use rigid pavement concrete instead of asphalt…We have another small section just after Cottage to do and then another in Capuchin. Once those two sections are addressed, we would have a complete rehabilitation of that road from Tan Tan to Capuchin.

“We’re also hoping to go back towards the Savanne Paille area using the same concrete; we also have one of the corners to extend there.”

About 10 young men are employed on the project including sub-contractor, Marshall Andre.

Hon.  Austrie says as Parliamentary Representative, he is quite impressed with the progress made so far.

“I’m very happy and satisfied with the quality of work being produced. We’re hoping that we can get 30-40 years of road without having to repair it again. I’m very satisfied.

“Because of the quality and aesthetics of the project, I think it is loved by anybody who has anything to do with it.”

The Member of Parliament added that despite challenges, much has been achieved.

“We had to widen the road and improve on some of the corners but originally, when the drains were constructed, they were done to accommodate asphalted concrete which would have been 2-3 inches of concrete but now we have to six inches of cement, we had to do some further excavation to get the depth and base which we require. So  the work was already done but we had to do more work.”

He says although costly, he believes concrete is more suitable for the topography of the area.

That section of the road is costing Government a further $600,000 to complete.

“My heart really goes out to the Prime Minister and Minister for Finance who is familiar with the area and who made that money available,” Hon Austrie said.

He also thanked the staff and Ministry of Public works who he says have been very supportive.