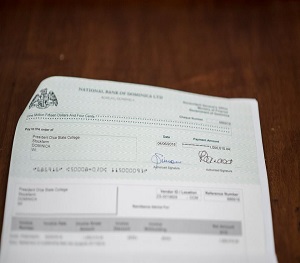 The Government of Dominica, on Wednesday, made a move to clear all outstanding student debts at the Dominica State College.

At a handing over ceremony at the school, the Hon Prime Minister and Minister for Finance, Roosevelt Skerrit presented a cheque of over $1 million.

“I did not ask for the name of the students who owe, I simply asked how much we owe,” he said.

The Prime Minister says the cheque is testament to Government’s dedication to providing higher education for citizens. The cheque will cover fees owed to the college for up to May 31st, 2018.

The Nation’s leader underscored that this gesture by the DLP government is unprecedented and urged students to not take for granted this investment in their education.

“My only message to young people […] is that we must not take these things for granted…” he urged. “We have to appreciate the efforts being made to provide opportunities to educate our people,” he added.

President of the Dominica State College Dr. Donald Peters also highlighted that this type of financial support to the college is a historical point.  He noted Government’s continued significant support to the institution.

“Government’s contribution to this college is unparalleled in the history of the country in that throughout since I have been here government has been spending about 90% of the cost to run this institution. This is important for those in our country to know that in the real-world governments do not spend more than 60%, and that is in the biggest developing countries. So, the burden on government has been significant,” Dr. Peters said.

Meantime, the Prime Minister announced that Dominican Dr. Peters has been appointed Dominica’s education ambassador and is expected to push securing prospects for universities abroad.

“Dr. Peters will be appointed as ambassador at large for education. His mandate will be to go to United States in specific schools to negotiate for other opportunities for our young people in Dominica,” the nation’s leader explained.