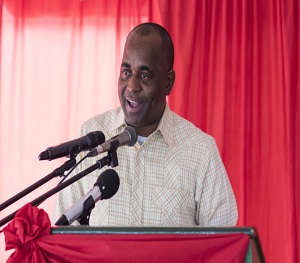 Government continues to make efforts towards its goals of providing safe housing for at least one thousand families in Dominica and last Friday it was Grand Bay’s turn to receive the news of housing developments in that constituency.

Contracts were awarded to eleven local contractors to construct sixty-two residential units in Grand Bay. At the contract signing ceremony which took place at the Geneva hard court in Grand Bay, the Hon Prime Minister and Minister for Housing, Dr Roosevelt Skerrit, announced that in total two hundred residential units will be constructed in the Grand Bay constituency.

This project to construct the first 62 units is funded through the Citizenship by Investment Programme and the Government of the Bolivarian Republic of Venezuela. The Hon Prime Minster thanked Venezuela for its continued support to Dominica despite its own challenges.

The nation’s leader further revealed government’s plan to reconstruct eight petro casas which were compromised by hurricane Maria in Centre. However, he said the newly constructed petro-casas will be strengthened.

“Those homes will be constructed using blocks and concrete and will certainly be built for purpose; meaning you will be able to stay in your home during any storm or hurricane,” the Prime Minister assured. “We will also start the process of doing the same for Dubique and contracts will be signed here to start that process with the eventual objective of transforming all the homes in the same manner…,” he informed.

Government has already spent $1.4 million in the Grand Bay constituency for the renovation of homes damaged by hurricane Maria. The Hon Prime Minister made a commitment that an additional $2.3 million will be available to continue assisting the people of Grand Bay to restore their homes. The 62 units will cost an estimated $16 million.

The Hon Prime Minister stated that government is ensuring that the locations identified for the construction of these homes are safe.

“We are not only seeking to build more resilient homes but where we build them is also important. The places must be safe and so we have to appreciate that some of us will have to leave the comfort of where we were born if we want to survive the element of the hurricanes… So, the government first will come to examine places and to be advised as to whether these places are safe before we build a home for anybody anywhere in Dominica,” he said.

We have 417 guests and no members online