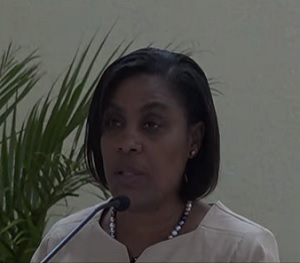 Financial Secretary, Rosamund Edwards has revealed that the hope of Dominica’s Gross Domestic Product (GDP) growing by 3% for 2017/2018 fiscal year has been reversed due to the expense and loss weight brought about by Hurricane Maria.

Financial assessments after passage of Hurricane Maria determined that Dominica’s estimated damage was at US$931 million and loss suffered at US$380 million. The needs assessment showed up to a cost of US$1.4 billion.

“Prior to the passage of Maria, we were on course to achieve economic growth in excess of 3% of GDP. Our current estimate is for a decline of 3% which means basically we’ve lost 6%. it is estimated however that the full impact of Maria will be felt in 2018 and we’re looking at as much as 16% decline in the economy,” the Financial Secretary explained.

The figures will be further refined as the Ministry of Finance undertakes specific national accounts surveys which capture fully the performance of each sector.

According to Edwards, progress of Dominica’s GDP is expected for 2019.

“As rehabilitation projects begin to take root we expect to see some recovery from 2019 with growth being registered from 2019 and over the medium term,” she said.

The Financial Secretary was speaking at a National Rebuilding and Economic Partnership Consultation last week.

We have 396 guests and no members online