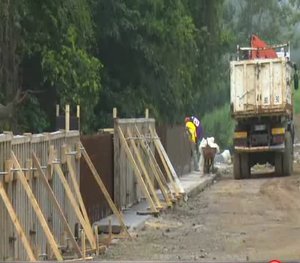 Dominica’s main airport, Douglas-Charles has proven to be a top priority for the Government of Dominica. The Honourable Minister for Public Works and Ports, Senator Mirium Blanchard, assured citizens that the airport, while safe, is being further rehabilitated for passenger and motorists safety.

A major project was developed at the airport in Melville Hall aimed at restoring its safe operations, implementing storm repairs while improving flood protection.

Phase one of the project estimated at $31.2m is being funded by the Citizenship by Investment Programme.

Phase two provided for in the 2016/2017 fiscal year will further increase resilience of the airport to weather events like Erika.

“Through the construction of additional river defence structures, dredging and river training. Work continues to advance on the major works at Douglas-Charles Airport. In fact, a milestone of the project was just reached last week with the reconstruction of roughly half of the apron and taxi ways. Inspectors from the Eastern Caribbean Civil Aviation Authority were on island towards the end of last week. I am proud to announce that we have received approval from ECCAA for its use.”

Meanwhile a gift from the Government of Trinidad and Tobago, solar lights, has been installed.

The new taxiway and apron were also commissioned last week.