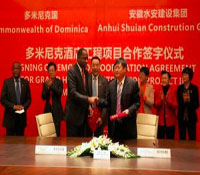 The Government of Dominica is currently engaging a Chinese firm on the possibility of constructing an International Airport in Dominica.

Prime Minister Hon. Roosevelt Skerrit said on Wednesday that a Chinese delegation representing Anhui Shui An Construction Group, is currently on island looking at a proposed site in Crompton Point to construct an international airport.

Prime Minister Skerrit said a draft Memorandum of Understanding (MOU) is now before the Government for consideration.

“That delegation is here to visit the site, to review documentations that we have on the Crompton Point site which was advised as being the only suitable site for an international airport in Dominica. Once we are satisfied with the contents of the MOU, we shall proceed with the signing of the MOU. That company will provide us with a conceptual design of the airport. Once we have that, we will engage the firm in further discussions as far as cost is concerned,” Prime Minister Skerrit said.

Cognizant of the fact that the construction of an international airport is a costly exercise, Prime Minister Skerrit said his Government will not borrow money to build one.

The Prime Minister stated that his Government will carefully examine all possibilities in having the airport financed using grant funds.

“If you look at our Growth and Social Protection Strategy (GSPS) paper, you will see that the International Airport is mentioned in that strategy as being an important element for the economic development of Dominica. The Dominica Labour Party has never been opposed to an international airport. What the DLP has said, is that the country cannot afford to contract a loan of over four or five hundred million dollars to build an airport.”

“I am saying to the people of Dominica, that under this arrangement, if it comes to a point where we have to borrow that sum to build the airport, we will not build the airport. Once we get this document/ dossier prepared on the airport from the Chinese firm, we will engage potential donors and friendly countries, with a view to see to what extent they will be able to assist us in the realization of our ambition to build an international airport in Dominica.”

The Prime Minister described the construction of an international airport as a massive undertaking and stated that while the airport will not be built next year, his Government will continue to pursue the possibilities of building one in the foreseeable future.

“We are not saying that the airport is going to be built tomorrow. It is something that we have been pursuing, we have had several leads, and we have had several discussions over the years with several groups in the United States, Europe and China.”

“This Chinese group which we are currently holding discussions with has indicated that they have the capacity to advance the conceptual drawings of the airport. Once this is done, we would have to do all the necessary Environmental Impact assessment studies and geological testing before we would actually start the commencement of an international airport,” the Prime Minister stressed.

The Government of Dominica in recent years has focused on developing the Melville Hall Airport as a short to medium response to inadequate air access into Dominica.

We have 245 guests and no members online