The Commonwealth of Dominica hosted a reception in honour of its Cuban friends on Wednesday, May 18th.

His Excellency the President of Dominica, Charles Savarin presided over the event at the State House.

The Cuban Ambassador stated, “Today, exactly 20 years ago, the Government of the Commonwealth of Dominica and the Republic of Cuba established diplomatic relations however, long before relations were established between our peoples, the first and a small group of 11 young Dominicans went to study in Cuba in the late 70s returning as professionals to the Nature Isle.

“Certainly after we established diplomatic ties, cooperation and brotherhood between our countries increased substantially. In all these years, almost 400 young people from Dominica have graduated from the Cuba scholarship programme.”

The Cuban Scholarship Programme is the highlight of the longstanding relationship.

The Ambassador thanked Dominica for its support of the campaign to end the US embargo against Cuba. For that, he says, his country is grateful. 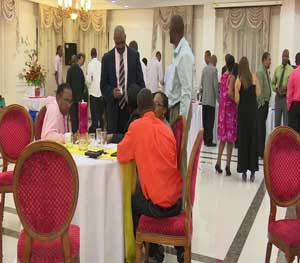 “Since 2000, the Dominica Labour Party Administration has expanded and deepened the friendship and solidarity between Dominica and Cuba and we have increased the cooperation and engagement between our two countries. The fraternal bonds between Cuba and Dominica therefore go beyond establishing formal diplomatic relations. We consider Cuba a sister Caribbean island with a similar history and culture. It is for this and other reasons that Dominica has stood steadfastly with the Cuban people against actions that have negatively affected them. The support of Prime Minister Roosevelt Skerrit and his Dominica Labour Party Administration has been manifested by our unwavering solidarity and support for Cuba in the international arena and in particular at the United Nations,” she said.

Cuban educators complement DSC lecturers at the State nursing school, and over 1,000 Dominicans have travelled to Cuba for eye care surgery.

He shared, “In the areas of housing, engineering technology and education, we have seen that the Cuban-trained graduates have made and continue to make a meaningful contribution to our national development. We can only hope, Ambassador, that in the coming years, we will see a strengthening of the relationship between our two countries and two  peoples.”

In addition to longstanding cooperation in health and education, Cuba now wishes to expand collaboration to agriculture.

While Dominica toasts to at least another 20 years, according to the Cuban Ambassador, Cuba too hopes for a long and fruitful relationship.

“I would like to ratify the political will of the Government and people of Cuba to continue the enforcement and relation of friendship and cooperation with Dominica,” Ambassador Frometa de la Rosa said.

He said to guests, “Dominica, tell me how we can help you and Cuba will do it.”

We have 313 guests and no members online