The honorary doctorate was presented to the Dominican leader at the university’s convocation ceremony on Tuesday 23rd, February.

Hon. Dr. Skerrit was selected as chief guest of the convocation, because of what Chancellor Ashok Mittal described as his “enormous global impact”; being among the youngest, yet longest serving leaders in the democratic world today.

The Hon. Prime Minister, in his address called for the deepening of relations between Dominica and India.

"I invite the Chancellor and Board of Governors of this vaulted institution of higher learning, to explore and consider the tremendous scope that exists for broadening and introducing the Lovely Professional University experience to the western world. You have an in-demand global product to sell and it should be sold globally.

"In the faith of strengthing ties, the Commonwealth of Dominica would be delighted to partner with you in this endeavour. I take this opportunity to invite those interested in travel or geothermal energy, or water resources to come to Dominica. I invite the Lovely Professional University to engage in a cultural exchange with the students of Dominica. I believe that the two strong cultures have a shared sense of community, a common thirst for knowledge, and the resourcefulness that creates leaders. For you, geographical boundaries should be nonexistent." 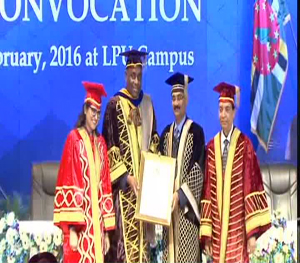 Chancellor of Lovely University, Ashok Mittal, made a special announcement at Tuesday’s ceremony.

"To mark the visit of Hon. Prime Minister, and to strengthen the bond for Dominica and Lovely Professional University, I take the privilege of announcing 10 full scholarships for the students of Dominica selected by the government of Dominica to study at LPU."

From India, the Prime Minister journeys to Dubai, in the United Arab Emirates, where he will meet with current and future investors, particularly those associated with several infrastructural projects, earmarked to start in Dominica in the weeks and months ahead.

" I congratulate our beloved Prime Minister on behalf of the people living at home and abroad, on the honour bestowed on him earlier today. Hon. Roosevelt Skerrit has been conferred Dr. of Literature by the largest and most prestigious university in India. It was in recognition of our Prime Minister's phenomenal impact on the global stage, ever since assuming the role of Prime Minister in 2004.

"The Chancellor of Lovely Professional University said, Mr. Skerrit is a role model to all aspiring leaders. He said that the humility of our Prime Minister was admirable and by virtue of the high esteem in which the Prime Minister, and consequently the Commonwealth of Dominica, was held by the university and the wider Indian community, the institution will as of next academic year, grant 10 scholarships to Dominican students wishing to pursue studies at the Punjab- based university.

"As Acting Prime Minister I consider this a glorious day for Dominica. This country might be small, and home to a mere 71,000 inhabitants, but we are fortunate to be led by a world recognized and respected leader who continues to bring great pride and opportunity to this nation. Any Dominican who viewed the convocation ceremony earlier today, must have felt a tinge of pride and accomplishment at the distinguish manner in which our Prime Minister spoke, and so humbly accepted this significant award.

On behalf of the Cabinet of Ministers I extend sincere congratulations to the Hon. Prime Minister, and assure him of our highest regard as he continues to blaze the trail as an outstanding world leader representing a small but significant country in world affairs. We as Cabinet of Ministers remain committed to giving him our unwavering and fullest support as he continues to lead our beautiful country. Also the people of the Grandbay Constituency join me in congratulating our Prime Minister on the receipt of this prestigious award. May God continue to bless our Prime Minister and his lovely family. May God continue to bless the Commonwealth of Dominica."

We have 468 guests and no members online