The Baroness flew into Dominica on Friday December 11th at the Douglas-Charles Airport where she was welcomed by the Hon. Foreign Affairs Minister, Senator Francine Baron.

“Although she was born here, she migrated to the United Kingdom with her parents at a tender age as many of our nationals before and since have done. Although Baroness has lived and worked in the UK all of her adult life, she has undoubtedly remained a child of the Caribbean and had held firm to the values of hard work and perseverance which we all instil in our children.

“Baroness Scotland is the daughter of an Antiguan father and Dominican mother. Her mother came from the village of Vieille Case but she was born in St. Joseph. 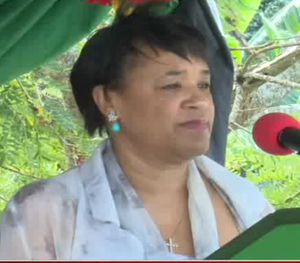 “She has pursued a dynamic career in law, public service and politics and has been instrumental in shaping and implementing projects in the UK, the Caribbean and Africa.

“No-one can dispute the Baroness Scotland is incredibly accomplished. Those of us who know how difficult it was for people of colour to succeed in the UK in the 60s, 70s and 80s willl appreciate the determination that it took for a woman born in Dominica of Caribbean parents to qualify as a barrister and go on to become the first Black and youngest woman ever to be appointed Queen’s Counsel,” Senator Baron listed.

Senator Baron continued that the Hon. Prime Minister was therefore confident that the Baroness would attract the most support based on her experience and familiarity with and sensitivity to the needs of the developing and developed world.

The Baroness too spoke of the Hon Prime Ministers’ role in the just concluded Commonwealth elections. She described Dominica’s leader as courageous.

She also spoke of the deceased former President, Dr. Nicholas Liverpool whom she saw as a light in her career.

“We have come a long way. Some people think that we are too small to have had so many honours placed on our shoulders. We already have the great honour of having the Secretary General of CARICOM, we have [the Director of the] Pan American Health Organisation and now we have been graced with the Commonwealth,” she said.

She pledged to serve all 53 states “to make our world a better place.”

The Baroness says she is “over the moon to be home.”

Meanwhile the Baroness says she is touched by the gesture of the renaming the Vieille Case Primary School in her honour.

When she arrived on Friday, GIS News sought to get the Baroness’ reaction to the move designed to honour her accomplishments and celebrate another great Dominican.

On Sunday December 13th, Baroness Patricia Scotland was taken on a tour of the resettlement site for the residents of Dubique.

The Baroness was made Dominica’s International Efforts Relief Coordinator shortly after Tropical Storm Erika swept through the island.

In September, the Baroness took a tour of the worst affected west coast communities speaking and commiserating with the victims.

This past weekend, she was accompanied by the Cabinet of Dominica to the south; first in Petite Savanne then on to Centre in Grand Bay where Petro Casas are being erected for the displaced residents of Dubique.

These were her thoughts.

“I think it’s a terrible thing to have happened to our beautiful country but we know that God doesn’t do anything for no reason and so we have an opportunity now to look to the future. This terrible tragedy happened at a time when the world was actually watching.

“We now have COP21 finally agreed in Paris; sustainable development is a reality. I think that this is our opportunity to say to the world come help us rebuild the beautiful nature island of Dominica and make a difference. It’s going to take all of us and I think that Dominica has shown that they have the passion, resilience and determination to rebuild their own country with the sweat of their own brow and their own hands but all of us need help.

“We need the help of the international community now and all of those who participated in COP21 and said they wished to put climate change right at the top of the agenda and save us.

“They now know what will happen to us [through] climate change. This is an existential threat to us today. So I am thrilled to be here; to be have been given an opportunity to see for myself all the hard work but also the devastation and pain which has been visited on Dominica so I pledge that I will do everything within my power to make sure the international community knows of our plight and comes to our aid.”

We have 368 guests and no members online