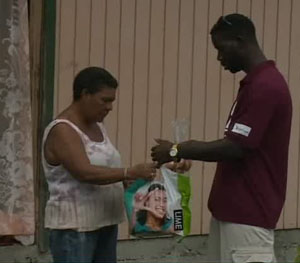 Telecommunications companies are teaming up to bring relief to those affected by Tropical Storm Erika.

Local providers, LIME Dominica and Digicel are leading that charge.

According to General Manager of Lime Dominica, Jeffrey Baptiste, “We actually collaborated with Digicel and got a boat into Dominica with supplies and equipment. We jointly donated water to the Red Cross to assist our people.”

“We have already [brought] in three shipments from St. Lucia for Red Cross; we have distributed $3,000 in free credit to our customers, we’re assisting various Governmental departments and groups with handsets and credit to enable them to communicate effectively.

“We’re working… to achieve hotspots in some of the shelters which don’t have access to the internet,” reported Richard Stanton, Country Manager of Digicel.

Partnerships are also being made across the region to donate to the Government of Dominica Relief Fund.

Digicel has also rallied 32 of its host countries for donations to the relief fund.

The telecommunications managers were speaking at a press briefing last Wednesday September 2nd.

Belles has received care packages thanks to LIME Dominica Ltd in partnership with the Hon. Telecommunications Minister, Kelver Darroux who is also Parliamentary Representative for the St. Joseph Constituency which includes Belles.

With the help of LIME Dominica employees and residents of St. Joseph and Mero, food supplies were made available to the people over the weekend.

Jeffrey Baptiste is the General Manager of LIME Dominica.

The Parliamentary Representative hopes to continue the aid distribution efforts in the coming weeks.

We have 340 guests and no members online