From November 4th to 6th a high level delegation of the Sacred Military Constantinian Order of St. George paid an official visit to the Commonwealth of Dominica.

The delegation also met with other officials including former President His Excellency Dr. Nicholas Liverpool and His Lordship Gabriel Malzaire, Bishop of Roseau.

On November 5th a brief exchange of honours was conducted at the State House.

His Excellency Charles Savarin awarded a Meritorious Service award to Prince Charles Of Bourbon Two Sicilies, Duke of Castro for charitable and community service to Dominica and strengthening of religious faith and participation in preservation and restoration of faith institutions in Dominica. 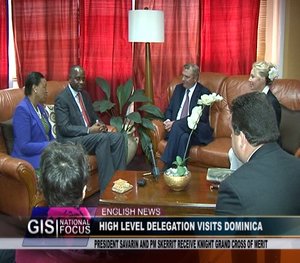 In turn the rank and dignity of Knight Grand Cross of Merit of the Sacred Military Constantinian Order of St. George was bestowed on His Excellency the President Savarin and Prime Minister Skerrit for the nation’s contribution to enriching its Christian identity through charitable work and its humanitarian endeavor and inter-religious harmony.

The awards were bestowed by virtue of their office held in the Commonwealth of Dominica.

The main purpose of the high level visit was to launch a series of major charitable projects on the island including restoration of the Our Lady of Fair Haven Cathedral in Roseau.

The Sacred Military Constantinian Order of St. George is an internationally recognised Roman Catholic Order of Knighthood headquartered in Rome.

The official visit to Dominica was part of a wider regional visit. The delegation also visited Antigua, St. Vincent and Barbados.

We have 231 guests and no members online