“On this the First day of November 2014, the year of or Lord, it gives me great pleasure to name the highway from Pond Case to the Douglas-Charles Airport the Dr. Nicholas Liverpool Highway.”

This is how the Hon Prime Minister Roosevelt Skerrit announced the official naming and commissioning of the Dr. Nicholas Liverpool Highway last Saturday, November 1st, 2014.

The highway was named after Dr. Liverpool who served as the 7th President of Dominica from 2003 to 2012.

Significant amount of financial resources have been invested by the ruling DLP Administration into the rehabilitation of the highway.

Emile Lancelot, Acting Chief Technical Officer in the Ministry of Public Works detailed, “The final cost of the road works is EC $74.3M and the bridges EC $9.3M exclusive of VAT.”

Taxi driver, Paul Carlton has applauded the Roosevelt Skerrit-led Administration for the improvement to the highway saying, “It’s a road on which you save time and problems; a road that the visitors that I drive are well-pleased with. One man said to me that to get investors here, we need good roads. And clap hands for those who see the need to bring good roads.”

Hon Prime Minister Roosevelt Skerrit defended his Administration’s decision to commission the highway in the name of Dr. Liverpool.

He stated, “We… rename this stretch of road from where we stand to the Douglas-Charles Airport after a distinguished son of the soil: a true patriot who through his brilliant and outstanding work in academia - in particular the law -and his loyal and dignified service to our country has earned himself regional and international acclaim. His work has caused the world to take a closer at Dominica.” 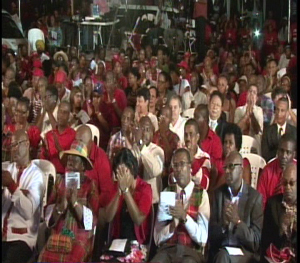 H.E the President of Dominica Charles A. Savarin presented a plaque and scroll to dr. Nicholas Liverpool who then addressed the ceremony.

“On behalf of all members of my family, I must say how grateful we all are for this honour bestowed today,” said Dr. Liverpool.

A sign was also unveiled by Verna Liverpool, wife of Dr. Liverpool.

We have 222 guests and no members online